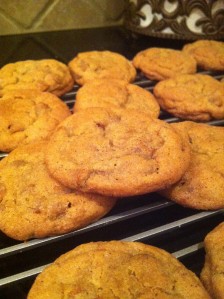 Snickerdoodles.  What’s not to like?  These are usually a real crowd pleaser because the flavor is so classic and simple:  cinnamon and sugar.  Does sweet cousin Sally have a nut allergy?  Uncle Ed hates chocolate?  Grandpa has falsies so caramel is out of the question?  Fret no more – the snickerdoodle is the cookie for everyone!

This particular snickerdoodle recipe uses vanilla pudding in the mix (which makes them so soft).  I also stumbled upon these little gems and threw them into the dough…Hershey’s cinnamon chips.

I’ve seen them in just about every grocery store the past few months with all the holiday baking supplies.  I’ve had some trouble finding them during the rest of the year…but if this becomes a family favorite, you can always find them online at places like Amazon.

These are not chocolate chips flavored with cinnamon.  They are little buttery cinnamon nuggets.  The cinnamon flavor is spot-on…not to overpowering.  Personally, I think they taste just like the streusal topping you might find on a coffee cake.  Uh, yeah…YUM.

For this recipe, I make sure the dough chills all the way through – which means overnight.  This way, you can easily roll them in cinnamon and sugar.  You get that nice soft center and a slight chewy crisp to the outside.

Combine the flour and baking soda and set aside.

In a large bowl, cream together the butter and sugars.  Beat in the instant pudding mix until blended.  Stir in the eggs and vanilla.

Stir in the cinnamon chips.

Cover and chill the dough until firm (preferably overnight).

Using your hands, take rounded spoonfuls and roll the dough into balls.  Drop the balls into a shallow bowl filled with cinnamon and sugar (1/2 c. sugar and 2 tsp. cinnamon) until they are coated.

Place onto cookie sheets that are lined with parchment paper or a silpat liner.

Bake 10-12 minutes until edges are golden brown.  They may still look a little under-done.  That’s okay, they’ll keep cooking on the tray as they cool.  Once they are comfortable to touch, transfer to a cooling rack.

What Do You Think? Cancel reply